Finding hidden treasure isn't just a dream for little kids; a person of any age would be delighted to discover ancient artifacts, antique jewelry, or even just a long-lost yet sentimental item hidden in an unexpected place around the house. When does the dream become reality? Not everyone who scans the floors with a metal detector is a complete whack job -- sometimes, the method can work with great success, and makes looking kind of crazy pay off tenfold. Whether it was found accidentally or after much laborious searching, here are nine awesome treasures found beneath the floorboards of houses. Yours could be next!

Imagine finding a small fortune hidden right beneath your own feet. The following is a list of treasures which where discovered  beneath peoples floors.

Finding hidden treasure isn't just a dream for little kids; a person of any age would be delighted to discover ancient artifacts, antique jewelry, or even just a long-lost yet sentimental item hidden in an unexpected place around the house. When does the dream become reality? Not everyone who scans the floors with a metal detector is a complete whack job -- sometimes, the method can work with great success, and makes looking kind of crazy pay off tenfold. Whether it was found accidentally, or after much laborious searching, here are nine awesome treasures found beneath the floorboards of houses. Yours could be next!

In approximately 870AD, a Swedish millionaire buried his hoard of silver Viking jewelry and Arab coins beneath the floorboards of his house on the island of Botland. Previously the richest area in that section of the world (which is now Latvia, Estonia, and Lithuania), it was common tradition to hide one's assets somewhere in the house since banks were not yet in existence. His fortune wasn't discovered until eleven centuries later in late 2000 -- and the pieces of broken jewelry and coins were estimated to be worth over 400,000 British pounds. It was an "extraordinary find," but this mysterious Swedish merchant wasn't one of a kind -- the treasure hoarders' habits of dying before they could confess their hiding places has led to over 800 stashes of valuables being unearthed on the island.

A woman in north Wales had an unexpected reunion with an inanimate object after workmen began rebuilding her old church by tearing up it's old floors to replace them. 16 year old Carys Williams dropped her favorite ring, given to her as a birthday present from her parents, and watched it slip through the floorboards at church. "I thought many times about the ring I had under the floorboards of the chapel," Mrs. Williams said in an interview with the UK Telegraph. Williams was unable to retrieve the ring until she heard about the construction taking place over three decades later, and told them her story. However, she was told that her search couldn't be carried out on her own -- it was too dangerous to go roaming around in the area where the building foundation no longer existed. Instead, the kind-hearted renovation workers took it upon themselves to find her personal treasure. One of them spent two hours sifting through the dirt before finally locating the jewelry and returning it to a grateful Williams, whose father had died only two weeks prior to the discovery. "It's lovely to have it back, and it's brought back so many memories," Williams said, "It's on my finger now [and] I don't think I will ever take it off again."

3. Treasure Beneath the Grime 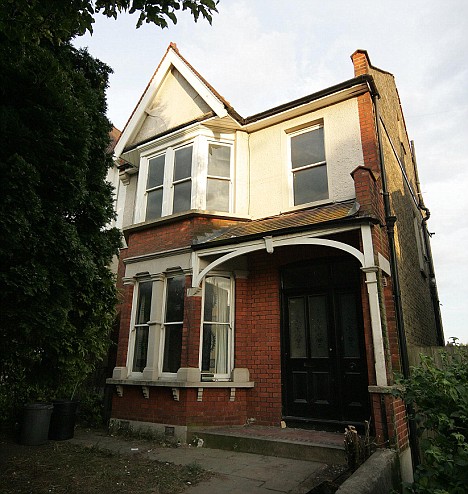 Hoarders are usually seen as poor, slovenly people with a ton of useless garbage lying around and nothing else. Buying 60 pairs of crappy underwear just because they're on sale doesn't exactly fit the description of 'treasure', but not all hoarders conduct their obsession so indiscriminately. A reclusive couple in Surrey, England, were found to have collected hundreds of thousands of pounds worth in cash, paintings, stocks, books, and antique plates. When Mr. Baker died in 2000, his elderly wife sat unmoving by a window literally for years until she was removed and taken to a hospital, where she later died. The house had remained in her possession until she died, inhabited only by the pigeons who broke into the top windows and sometimes died in the back rooms of the upper floors, and ironically unsatisfied squatters who abandoned an attempt to obtain squatters' rights. Despite it's filth, workers uncovered remarkable treasures when they braved the squalor with gloves and masks to clean it out. Rare coins, antique books in original packaging, Victorian paintings, and loads of limited-edition plates were all found in addition to hard cash and even stocks.

The neglect began way before Mr Baker passed away. "They made a strange couple and never had any visitors, except from the Church and, after Mr Baker died, from social services." Neighbors said that for the past 50 years, the house had no rugs, no curtains, and weeds a dozen feet high. The only clean part was a small patch of dirt in the front yard, whose explanation sounds kind of creepy: Mrs Baker could sometimes be seen tending to the small area of nothing late at night by flashlight. The saying "money can't buy happiness" seemingly applies to sanity, as well. 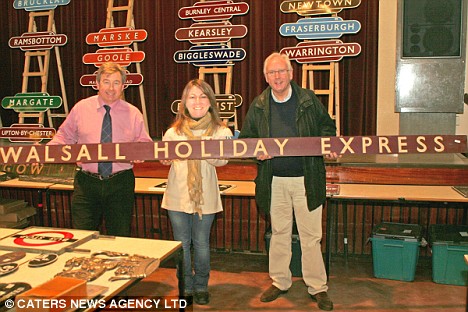 An English family uncovered over 20,000 pounds of treasure that wasn't hidden away under the flooring at all, but were the actually floorboards themselves. While renovating their attic, two grandparents noticed that the wood beneath their feet was stamped with the names of cities and towns. The floor had been made out of recycled antique railroad signs, which the couple removed and began selling after appraisal -- a famous music producer purchased six of them at a whopping 1,500 pounds! Mogul Pete Waterman's first choice was a sign for the Walsall Holiday Express, the train he rode as a child. The floor was put together by a man who had worked at the Wolverton Works rain depot between the 1950s and 60s, and was sturdy enough to support the weight of various people for over 40 years. The memorabilia now finds itself hanging on the walls of railroad men who love the antique train signs which are so rare today. Most of them were destroyed at the end of the steam age, but they once served to point trains in the right direction and let others know where they were headed. 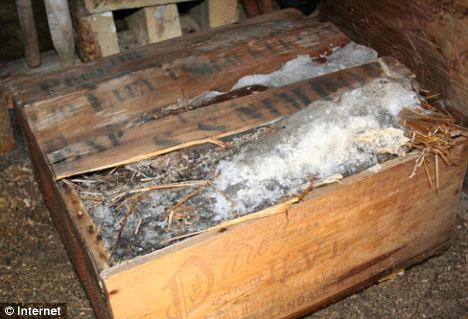 When a team of people were working to restore a historic polar explorer's hut, they stumbled upon enough liquor to keep them warm for weeks hidden beneath the floorboards. Ernest Shackleton's Antarctic hut served as more than just the purpose of housing him from sub-zero temperatures; the room under the floor fit two crates of brandy and three crates of whisky. The Mackinlay's Old Whisky were left behind during a failed expedition to the South Pole, and had sat in the icy ground for over 100 years with impressive resilience. The crates managed to stay in great condition, and although many of the bottles have cracked from the cold, workers who removed the wooden boxes said they could hear liquid swishing around on the way out of the shack. However, no one will have the pleasure of getting wasted on the remaining century old liquor: the bottles are regulated under conservation guidelines set by 12 Antarctic Treaty nations. The bright side is that the brand's original distillers will be studying the antique alcohol in an attempt to replicate the formula. 'This is a gift from the heavens for whisky lovers," said Richard Patterson, master blender at Whyte and Mackay

A multi-million dollar pile of ancient silver coins was unearthed beneath the floors of the smallest room in a Roman villa. It was found by Martin and Kevin Elliot, locals who were prowling around with metal detectors. The coins, which were from first century BC to third century AD, most likely amounted to the savings of the building's original owner. Some of them depict Mark Antony winning the battles he actually lost, while others display Roman rulers like Commodus -- a man who renamed Rome and the months of the year to bear references to his own name. Their hiding place was pretty shallow for a treasure worth over six million U.S. dollars, but it's likely that the villa was only equipped with beaten dirt floors at the time of its storage. The unlikely pair who found the treasure won't get to buy any cool new treasure-detecting gadgets; it's set to go on display at the County Museum in Taunton.

Not only has the source disappeared, but so has the image, which we apparently linked to, rather than saving to our server and then properly sourcing, like all responsible bloggers should do. Here's what you would have seen though!

Precious antique Judaica was found hidden away beneath a synogogue in Poland which had been destroyed during the Holocaust. In fact, the place was in the town where the horrible and most infamous death camps of Auchwitz itself was located. An excavation prompted by a Holocaust survivor's recollection of the treasure's whereabouts lead to the discovery of three bronze candelabras, a bronze menorag, 10 chandeliers, an eternal lamp, tiles, marble plaques, and other artifacts from the building's remains.  The synogogue was set on fire in 1939 by the Nazis during their invasion of the town of Oswiecim, and would eventually kill most of the 6,000 jews living there at the time.

The synogogue had been recycled as a warehouse since then, but was transformed into the Auschwitz Jewish Center complex in 2000 to educate people on Jewish life prior to the war. Yihashu Yarot was the only reason the artifacts were found; he recounted seeing the old caretaker bury them nearby over half a century ago. The treasure is to be displayed at the Jewish center near which it was found, but only after undergoing a $100,000 restoration process.

There, now. Wasn't that even more fascinating, not seeing it? Us letting you use your imagination? Could be 100 feet tall, this one. We'll never know, because now we can't see it. Our fault. We dropped this ball, and it shattered like a Fabergé egg. The ancient city of Assur off the Tigris river is home to more treasure than the human race may ever know about. It's one of the earliest established cities on earth, and home to a number of firsts: the first great library, and inventions like aqueducts and paved roads. Since the Iraqi government plans to build a dam nearby which will destroy the crumbling remains of Assur, many of its buried artifacts may also be destroyed or simply never found.

This isn't the first time Assur has faced destruction of some kind. Around 600 B.C., Babylonians from foreign lands invaded the city and it's surrounding empires, even burning down one called Nimrud. It wasn't until 1988 that someone discovered the charred remains still held some of the treasures from that ancient time period. When Iraqi archaeologist Muzahem Hussein was in a Nimrud palace, he happened to displace a few bricks which looked oddly unorganized compared to the rest of the place. Beneath them was hidden a secret vault which led to a tomb, filled with gold jewelry from thousands of years ago. Within the next three years, three more tombs were discovered -- all with their own trove of jewelry and long-dead royalty. This was the biggest find in the ancient world besides the opening of King Tut's tomb, which wasn't since the 1920s. Unfortunately, the Gulf War prevented the excavation operation from proceeding, and no new artifacts have been found in the area since.